Tis the season for holiday baking! There’s a  good chance you’ll want to make a pie for either Thanksgiving or Christmas (In my case, both) For many years I used pie crust  from the refrigerated section of the grocery store. It was reliable, and while it wouldn’t win any awards, it was at least decent.

Then, something changed. At first I thought maybe I got a bad batch. I bought some more, still it wasn’t right, something had changed with the texture, the look, even the smell was different. Every time I opened a package, I didn’t like what my nose was telling me.

A quick web search showed I wasn’t alone: many have complained about whatever has changed with these crusts. So, I decided to make my own.

Home made pie crust has a certain mystique, some think it’s part of folklore, handed down through the ages. Actually, it’s really very simple. I especially like the version on marthastewart.com that uses butter rather than lard, shortening or any other unpleasant oil. Pie crust is even easier to make if you have a food processor, or so I’ve heard LOL, but I will describe the old fashioned mixing method.

To start, mix together the dry ingredients (flour, salt and sugar) just to combine.

Then, cut a butter stick into small cubes.

The goal is to create a mix that resembles coarse meal, with pieces no larger than a pea. This took about 4-5 minutes to manually mix with the pastry blender.

To this, add two tablespoons of ice water and mix in. I again employed the pastry blender for this, but eventually used my hands to ensure the dough is evenly mixed. The recipe calls for adding one or two more tablespoons of water to ensure you get the right consistency, and I usually add both these optional tablespoons, for a total of four.

Place the dough on a piece of plastic wrap, shape into a disk, then wrap and refrigerate for at least an hour.

To bake, unwrap the dough and place on a large piece of floured wax paper. Roll out the dough with a rolling pin to make a large circle, about 14 inches in diameter.

Then, use the edge of the wax paper to guide and roll the dough around the rolling pin, kind of like a roll-up window shade.

The rolling pin becomes the mechanism to transfer the crust from the work surface to the pie plate. When ready, you’ll unroll the dough from the pin to go into your pie plate.

Trim and crimp the edges.

The plate can now be refrigerated while the filling is prepared or filled right away and baked.

The recipe can be doubled for a 2-crust pie but I prefer to make 2 batches of one crust each. Since I am mixing manually, I think a double recipe in one bowl would be difficult to work with. If I ever get a food processor, this approach might change. 😀

This pie crust is easy, and you get huge bonus points for making it yourself! 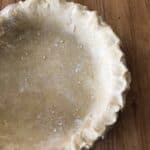