You know, ramen has come a long way. I don’t think I ever heard of it until I was in college. At the time, ramen meant cheap instant noodles with a flavor packet. And cheap! What were they, three or four packs for a dollar? Perfect dorm room fare: Carbs that didn’t require a lot of cooking or kitchen equipment. Of course, you were always hungry an hour after.

Fast forward to today. Ramen has been dressed up and taken downtown. Seems like there’s a ramen restaurant on every other corner, each claiming to be better than the last. How much variation can there be, right? It’s just noodles in broth. Surprisingly, the possibilities are endless.

I was talked into trying one of these restaurants recently and was pleasantly surprised. In many ways, these “noodle bowls” are just like good old American noodle soup, only with Asian flavors and ingredients. The broth is a flavorful base to which meat, vegetables and noodles are added.

So I was intrigued when I saw this recipe in the New York Times. It is vegetarian, but the mushrooms give the “meatiness” you might otherwise want. It can be made with different noodles to suit your tastes, like udon, soba, rice or spaghetti, which means that this could possibly be made gluten free if you use rice noodles and tamari in place of soy sauce (If I am wrong, please let me know!)

I used udon noodles, because they conveniently come in a 2 ounce package (just throw away the flavor packet.)

My biggest adaptation to this recipe was to reduce it to a smaller volume: the original recipe called for 1 ½ pounds of mushrooms and 8 cups of water, which is going to make a LOT of soup! So I re-sized it so I wouldn’t have huge volumes of leftovers.

This soup is not complicated. Start by cooking the shallots and garlic in oil, then add mushrooms and let them cook for 10-15 minutes until they have released their moisture and are a nice deep golden brown color.

Then add the liquids and let this simmer for another 15-20 minutes to meld the flavors. Cook the noodles separately (I used udon) and then add them to the soup for a few minutes to soak up some flavor. Serve with chopped fresh herbs. I have used cilantro and parsley for this and liked them both. I think the cilantro adds a little more of a spicy quality. I might have to try them again side-by-side to determine which I prefer (Oh darn, I have to make it again!) LOL 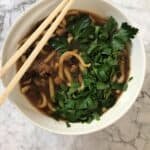