I live in Wisconsin, the land of breweries, cheese factories and two of our favorite-est football teams: The Packers and the Badgers. So any recipe that combines beer and cheese during the football season has my attention. And what do we call such a recipe? Why, Beer Cheese Dip – as natural as a cheesehead at Lambeau Field.

Now, I love a good Brie appetizer, but I know it’s not for everyone. And probably anything made with quinoa or feta cheese will scare off a few.

Some think the ideal game time appetizer is beer and pretzels. Others say . . . cheese platter! The beauty of this dip? It combines all three!

Any beer will work – even the non-alcoholic type. As long as that bottle is open, use part of it to make something for your guests. Alternatively, you might open a brew especially for this dip. Then (under Wisconsin rules), you can drink the rest and it doesn’t count. Remember, though, no drinking and driving! Keep it safe.

Fun fact: Beer is one of the oldest and most widely consumed alcoholic drinks in the world. It is also the third most popular drink overall after water and tea. Beer is brewed from cereal grains—most commonly from malted barley, though wheat, maize, and rice are also used. (Wikipedia)

Whip that beauty together into a creamy combination. It can be served immediately. But, if you give it a little time (30-45 minutes) the flavors develop more. Give that dressing mix and cream cheese a chance to know each other.

Now that you’ve made such a naturally delicious dip, what do you serve it with? Why – pretzels, naturally! (You could also try fresh vegetable sticks but, c’mon, pretzels are pretty darn good).

So, for those suspicious of “weird” ingredients, go basic with this simple Beer Cheese Dip.

Who could argue with beer, cheese and pretzels? They’re becoming as American as baseball, hot dogs and apple pie. 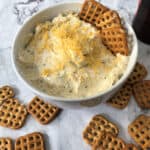