When I want a quick salad to go with whatever is on the grill, pasta salad is an easy choice. I typically use whatever fresh vegetables happen to be on hand. Then add cheese and meat according to preference or mood of the day. I have found this to be a good venue for whole grain pasta. This is because the use of dressing makes it hard for “picky eaters” to distinguish between the “white stuff” and whole grain.

What veggies for the pasta salad?

Because I had these on hand, I used tomatoes, cucumbers, carrots, yellow bell pepper, green onions. In addition to the veggies, I added salami and mild brick cheese. And pasta of course. I like to use rotini; the dressing clings better to the spirals.

My dressing solution is super-simple. Basically, use some Italian salad dressing, mixed with a little bit of mayo. The mayo thickens the dressing slightly so it sticks to the ingredients.

Mix it all together and you have yourself a salad! Have this easy pasta salad with a Juicy Lucy , grilled pork tenderloin or pulled pork. 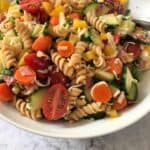 The art of pasta making and the devotion to the food as a whole has evolved. Italians eat over 27 kg (60 lb) of pasta per person, per year (estimated). This easily beats Americans, who eat about 9 kg (20 lb) per person. In Italy, they love pasta so much that individual consumption exceeds the average production of wheat of the country. Thus, Italy frequently imports wheat for pasta making. In modern society pasta is easy to find. A variety of types are available in local supermarkets. With the worldwide demand for this staple food, pasta is now largely mass-produced in factories; therefore only a tiny proportion is crafted by hand.

Pasta was originally solely a part of Italian and European cuisine. With an increase in popularity on a worldwide scale, pasta has crossed international borders. It is now a popular form of fast food and a staple in North America and elsewhere. This is due to the great amount of Italian immigration into Canada and the United States around the beginning of the 20th century. (Source: Wikipedia)