I love this time of year. It’s the time of the harvest and there’s such an abundance of fresh vegetables available. So many of these veggies can be purchased year-round but let’s face it, they taste best in season. For example, grape tomatoes, there’s a little extra sweetness in every bite. I bought them in bulk last week and snacked my way through in two days.

This recipe has been heavily adapted from one of my America’s Test Kitchen cookbooks, and it takes the grape tomato from snack to salad while still maintaining a “star of the show” status. The flavors are reminiscent of my Caprese Pasta Salad, only without the pasta. So, if you prefer a low carb version, this tomato salad might be for you!

The juiciness that makes tomatoes so tasty can sometimes be a drawback in a salad. Too many cut tomatoes = soupy liquid in the bottom of the bowl. So this recipe treats the tomatoes first with a little sugar ‘n salt and then the liquid is separated out to become the base for the dressing.

Shopping opportunity! Owning a salad spinner would come in real handy for this. Since I do not, I’ll lead you through my workaround. (And maybe go shopping later).

First, cut the tomatoes and place them in a bowl with ½ tsp sugar and ¼ tsp salt. Mix and let sit for at least 30 minutes. Then, transfer the tomatoes to a large colander placed over a bowl.

Using a large spoon, press the tomatoes to expel liquid.

The goal is about 1/3 cup of liquid, from which the seeds are strained.

The liquid is then placed in a small pan with minced shallot and some balsamic vinegar and brought to a boil to cook for 6-8 minutes until reduced.

This is then transferred to a small bowl to cool before whisking in olive oil to make the final dressing.

Once the dressing is ready, it is added to the tomatoes, mozzarella pearls, and torn basil leaves to make a fresh and flavorful side salad for any meal! 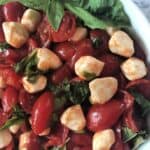