This week marks the start of the 100th season of the National Football League, or NFL. I’ve lived and died through so many Packer games, it feels like a century.

Traditionally, each year in the NFL, the first regular season game is hosted by the defending Super Bowl champion (*Bonus question: Can you name that team?).

However, this year, the season kickoff game will be fittingly played by, who else? the Green Bay Packers vs. the Chicago Bears, one of the oldest rivalries in the NFL. So, of course, a special game-day snack is required!

With this dip, I am riffing on my American Flag Taco Dip, which I made for the Fourth of July. For the Packer Party Taco Dip, I made layers of beans, salsa, guacamole and sour cream before topping with cheese and pepper decorations. Feel free to use any favorite layers as preferred. 😀

I made this in a 10-inch round glass pan, a “torte” pan that I’ve had forever and never made a torte. But it’s made-to-order for this type of dip; its high sides keep everything contained.

My first layer is refried beans. I prefer salsa-flavored beans, the salsa gives a little zip to the normally bland beans. Follow that with simple guacamole – no need to get fancy with this “guac”- mashed avocado and lime juice is enough, anything else gets lost in the many flavors of the other layers.

The next two layers are salsa and sour cream.

As you can see from the picture, it’s almost impossible to layer sour cream on top of salsa without the two mixing. Not that it matters, since it all gets covered up. But another approach could be mixing the sour cream and salsa together and making it all one layer.

Then comes the fun part – (no, not the eating, yet!) the decorative layer. The crucial ingredient, vital to the success of nearly any recipe, is of course (Wisconsin residents say it with me) – “CHEESE!”

For the neutral background, Monterey Jack works well. The green for the logo is chopped green pepper. I also chopped some yellow pepper for the logo’s circle of yellow.

To help with the “G” I decided to make a stencil.

Like any good fan, I have a favorite Packer t-shirt so I used wax paper to trace the Packer G and thought that would be enough, but soon realized wax paper alone is too flimsy. So I copied the design onto an old Manila file folder.

When it was time to use it, I delicately layered both the sturdy file folder and the wax paper on the cheese before adding the green pepper G. (The wax paper layer was to help prevent the “folder” from getting soggy. Probably not truly necessary.) The yellow circle I did freehand. The stencil survived and is ready to be used again. 😀

The result? A super-fun taco dip, suitable for any Packer party!

Grab some tortilla chips and you are good to go! 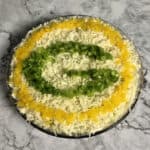