Happy New Year! Anyone want to admit to a New Year’s resolution? One of the most common relates to dieting. My version: I want to weigh what it says on my driver’s license. 🤪

I am coming off a couple months, several months, oh let’s be honest, a whole year a stretch of over-indulgence, and it’s time to reset! Therefore, I will be focusing on low-carb choices this month, and spaghetti squash is one of my favorites for this.

How to microwave spaghetti squash

There are many ways to make spaghetti squash. The fastest by far is the microwave. I’ve tried this two ways: cut and uncut.

Either way, the first step is always to pierce the skin with a knife several times in order to let steam escape (You do the same thing to a potato when using the microwave).

Cut the squash in half, remove the seeds and place it cut side down in a pan with some water.

Microwave time varies based upon the size of your squash. I recommend cooking for 5 minutes and then checking the squash for “doneness.” To do this, simply “stick a fork in it,” as the saying goes and if done, the fork will easily pierce the skin and sink into the squash. If not done, microwave for another 2-5 minutes, depending on how quickly it is cooking.

When cooked, it’s pretty easy to tell by pressing with your thumb.

I always leave the squash sit for at least 10 minutes before cutting into it. When it’s time to cut, always watch out for steam!

The disadvantage to this method is that you still have to remove the insides and seeds, which are all hot and weird now, LOL.

How to roast spaghetti squash

In spite of all the ease afforded by the microwave, I prefer roasting spaghetti squash if at all possible. Spaghetti squash alone does not have much taste, but roasting creates carmelization, thereby increasing the “yum” factor.

And, maybe it’s just me, but I think the texture is a little softer as well. You can never expect spaghetti squash to have the same texture as actual spaghetti noodles, but roasting seems to leave the squash more tender.

To roast, the squash is cut in half lengthwise. Cut the stem end off first and then place the squash upright on that end – this makes it a little easier to cut in half. The cutting will work best if you have a big enough and sharp enough knife, but I have also been known to use a hammer to help that knife along when it gets stuck halfway through the squash. #shortpersonproblems.

Remove the seeds from each half of squash, then brush the inside with a little olive oil. Sprinkle with salt and pepper and place cut side down in a roasting pan.

This goes in a 375F oven for an hour, after which you will have beautifully cooked halves of squash.

The strands are easily scraped up with a fork. 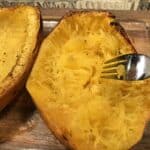 Try it with ratatouille, or in a low carb soup! I also like to make a spaghetti squash casserole you might want to try. So many possibilities!