Since Memorial Day is upon us, I thought I would post this recipe just in case you’re about to throw some sausages on the grill, and are worried about having leftovers. This stew is so yummy, you might want to cook up some extra on purpose!

The recipe is meant for bratwurst or Polish sausage, but really almost any sausage will work. When I made this recently I used 4 bratwursts and 2 Italian sausages – naturally, because that’s what was in the fridge!

I can’t give you a link for this recipe, because I got it before there was an Internet. I can however tell you where I found it.

You see, in the 1980’s I worked for a healthcare organization in a position some called “relationship management.” In other words: sales.

It’s not in the job description but I spent a lot of time sitting in doctors’ waiting rooms. Appointment times were estimates, because, of course, the patients always came first.

Picture it: no Internet, no smart phones, no idea how soon your name will be called. The only entertainment was to pick up a magazine. I quickly became an expert on celebrity gossip rifling through back issues of People and then on to Redbook and Good Housekeeping. And, it was in one of those magazines that I found this recipe.

I still have it scribbled on yellow legal paper from my folder (the same paper with tips about two other potential customers, plus a recipe for Grand Marnier sauce. Ultimately, the recipes turned out better than the customers.😀)

When I first dug this out of my recipe box, it turned out good-not-great. So, I made it again with some adjustments, and I realized where I went wrong the first time. It’s not a complicated recipe, but a few rules help make it great:

I hope you give this recipe a try. It’s a keeper, for sure! 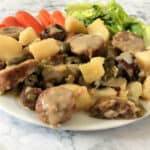