I love a classic salad, and this Nicoise salad certainly qualifies. It’s an easy dish that has many variations, which means you can adjust ingredients to suit individual taste buds. This version comes with a shallot vinaigrette which complements the flavors wonderfully.

Salade niçoise (French pronunciation: ​[niˈswaz]), is a salad that originated in the French city of Nice. It is traditionally made of tomatoes, hard-boiled eggs, olives and anchovies or tuna, dressed with olive oil. It has been popular worldwide since the early 20th century, and has been prepared and discussed by many chefs. It can be served either as a composed salad or as a  tossed salad. Freshly cooked or canned tuna may be added. For decades, traditionalists and innovators have disagreed over which ingredients should be included; traditionalists exclude cooked vegetables. The salad may include raw red peppers, shallots, artichoke hearts and other seasonal raw vegetables. Raw green beans harvested in the spring, when they are still young and crisp, may be included. However, cooked green beans and potatoes are commonly served in variations of salade niçoise that are popular around the world. (Wikipedia)

Now, you may have glanced at the calendar and noted that today is April Fool’s Day. And you may think there’s a joke or prank behind this recipe found at Good Housekeeping. But there isn’t. Instead, April 1st is notable to me because my cat, Walter, celebrates his birthday today.

Again, no joke. Walter’s April 1st birthday is based on sound reasoning: He was rescued in December and his age at the time was estimated to be about 18 months. And, because most cats seem to have kittens in spring, I am one of those owners who celebrate their pet’s birthday on April 1st. Ok, maybe it’s a little bit of a joke…

Here’s my Walter, a very handsome and unique Ragdoll, a wonderful breed.

But what does he have to do with this recipe?

Well, because I use oil-packed tuna for this salad, it creates an irresistible aroma, which Walter simply can NOT stay away from.

Suffice to say that it took more effort than usual to get a “clean” shot of this salad!

So, I’ve decided that this salad should come with a label. WARNING: High risk of thievery!! LOL 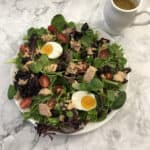 Watch out for cats! LOL

Another main course salad to try is this Beet Salad with Goat Cheese.

For other salads using tuna, try this Tuna and Bean salad.

Or, for a shrimp – based salad, this Lime Shrimp and Avocado Salad will NOT disappoint!