The only problem with recipes for Queso Dip is that 90+% seem to start with a so-called “processed cheese product.” Hmm.. Another curiously bland marketing name for the same thing is, “Pasteurized Prepared Cheese Product.”

Perhaps it’s my cheesehead roots because even my stomach balks at “Pasteurized Prepared….” whatever. I just don’t feel right – physically (and, yes, morally) – after eating it. Granted, some find Velveeta tasty and convenient; it’s very popular. But consider the ingredients:

Which is why I was so happy to get this recipe, courtesy of my daughter.

How to make Queso Dip with real cheese

It starts with evaporated milk, then some pre-shredded cheese, and a can of Rotel tomatoes. That’s it!

The final touch is up to you: perhaps a little spice tailored to your palate to produce deliciously dippable dip.

A note about the tomatoes: Rotel tomatoes come in different varieties. I tried “chunky” and it was ok, but not my favorite. The chunks are just too . . . chunky. Too big for me; the chunks dominate the taste. And curiously, there often were too many bites without tomato-y bits.

The best I found is the “original” Rotel. To me, it provides the greatest distribution of flavors throughout the dip.

I also tried the can with Habanero peppers and liked that as well. Compared to other spices, Habanero peppers provide an uptempo “heat,” not overwhelming, just a flamenco-type kick to the taste. ¡Perfecto!

Also, be sure to use a package of pre-shredded cheese. There are many pluses: It’s super-convenient, the cheeses are typically coated with a natural agent to prevent caking such as modified cornstarch or potato starch, and, once heated, those ingredients serve as thickening agents. Win-Win-Win! 😀

Have some queso nacho-style with guac for a super tasty snack! 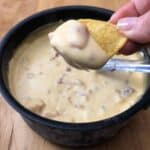 You might also like Pico-Avocado Dip. Maybe some Mini Bell Pepper Poppers with Cilantro-Lime Sauce. So many appetizers, so little time!

And while you’re setting up this Tex-Mex buffet, be sure to whip up some Taco Bell copycat quesadilla sauce for dipping or cooking!